Greg Detre co-founded Memrise.com with Ed Cooke, blending the art and science of memory to power incredibly effective, playful learning experiences. Memrise is now the second-largest language learning app in the world, and has helped 40m people learn 100+ languages, won Best App in the 2017 Google Play Awards, and been featured in The Guardian, Wired, The Independent and elsewhere.

Before that, he graduated with First Class Honours from Oxford University, studied at Harvard on a prestigious Frank Knox Fellowship, and received his PhD from Princeton University on the computational neuroscience of human memory & forgetting. He has 20 years of software engineering experience, working in Python, C#, Clojure, Javascript, Matlab, R, Lisp and a variety of other languages. While at Princeton, he led the development of an open source machine learning toolbox for fMRI data used by hundreds of labs around the world, wrote an Emacs mode used by exactly one person in the world, and coordinated the team behind Princeton’s prize-winning entries in DARPA’s international competition to read someone’s mind with a brain scanner.

He has since helped set up The Guardian’s data warehouse, and worked as Big Health CTO to grow Sleepio into the best-in-class digital health for insomnia suffers. Most recently, as Chief Data Scientist at Channel 4 in London, his team developed a flurry of new and prize-winning data products across advertising, personalisation and forecasting, winning the DataIQ 2019 ‘Best data and analytics team’.

He now works with fast-growing startups and larger companies as an advisor and coach, helping them build and develop their data/technology teams.

In the future, he’s working on a new product, Spideryarn, a tool for writers and thinkers to manage complex ideas. 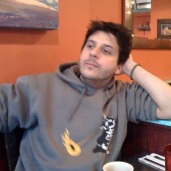